A list of 196 countries ordered by “triangularity” can be found in the Results section of this post.

Details of the methods are described in the following two sections. I have included all my code at the very end of this post.

I was inspired to write this blog post after reading two excellent posts. One of these is about finding the most rectangular country and is by David Barry. The other is by Gonzalo Ciruelos and is about finding the roundest country. I’ll provide links to these posts below:

I thought it would be interesting to have a go at calculating the most triangular country. I followed a similar method to the previous posts. The first step is to define mathematically what “triangularity” means. The next step is to find a way to calculate triangularity for every country in the world.

In summary, the method involves picking a similarity measure between a triangle and a country, then, for each country, finding the triangle that maximises the similarity measure. This maximum similarity is the country’s triangularity. Finding a triangle that maximises similarity is an optimisation problem. A triangle can be uniquely defined by the coordinates of its three vertices. Hence, there are 6 free parameters in the optimisation problem (an \(x\) and \(y\) coordinate per vertex). In contrast, defining a rectangle requires five parameters, and a circle requires only three (e.g. the coordinates of the center of the circle and its radius). As a result of the greater number of free parameters, this optimisation is more prone to get stuck in local optima. I tackled the problem by running the optimisation multiple times per country with randomised initial conditions.

Overall, I am happy with the results.

Following Gonzalo Ciruelos’ example, I will define the similarity of two sets \(A\) and \(B\) in \(\mathbb{R}^{2}\) as the area of the intersection of the sets divided by the maximum of the areas of the sets.

This definition of similarity has the following properties:

In practice, calculating the triangularity exactly for a country is not possible. However, using optimisation methods, it is possible to produce a reasonable approximation.

I used the freely available countries dataset from Natural Earth. The shapefile contains an ordered list of latitude and longitude points for the borders of 247 countries. Countries have one or more continuous parts (for example, each part might be an island belonging to the country). The part information is a series of indices that mark where the points for each part of the country begin and end.

The first step in processing the data from the shapefiles was to convert the latitude and longitude coordinates using an azimuthal projection centered on each country. To do the conversion, I adapted some code from this blog post. Then, using the python Shapely package, I converted the coordinates into a set of polygons for each country.

I wrote a function to calculate the similarity between the set of polygons that make up a country and a given triangle, making heavy use of the intersection and area methods from the Shapely package. I created an R-Tree for each country, using the STRtree class in Shapely. This makes it fast to query which parts of the country might intersect with the triangle. Then, for each of these parts, I calculated the area of intersection with the triangle. These are summed and divided by the maximum of the total area of the country and the area of the triangle, as per the definition of similarity. This worked for all countries, apart from Antarctica, due to a problem with the polygon intersecting with itself.

The final step was simply to save an image of each country and its most similar triangle, and create a CSV file with estimated triangularity for each country.

The results shown here are all the countries in the Natural Earth dataset that are also countries according to Encyclopedia Britannica. This means a slightly thinned down list of 196 countries from the original list of 247.

So these results would suggest that the most triangular country in the world is Nicaragua, followed closely by Bosnia and Herzegovina. (I will add that I found out an interesting fact about the flag of Bosnia and Herzegovina which is that it features a triangle that, according to Wikipedia, represents the approximate shape of the territory. Indeed, it does!)

I plotted the triangularity of each country by rank, labelling every 25th country. This shows that there is a quite gentle decrease in triangularity for the first 150 countries followed by a sharp drop off, seemingly due to countries that have multiple parts. The least triangular country is the Marshall Islands, hardly surprising considering the country is a collection of tiny islands spread over a large area of ocean. The least triangular country that isn’t a group of islands is Vietnam. 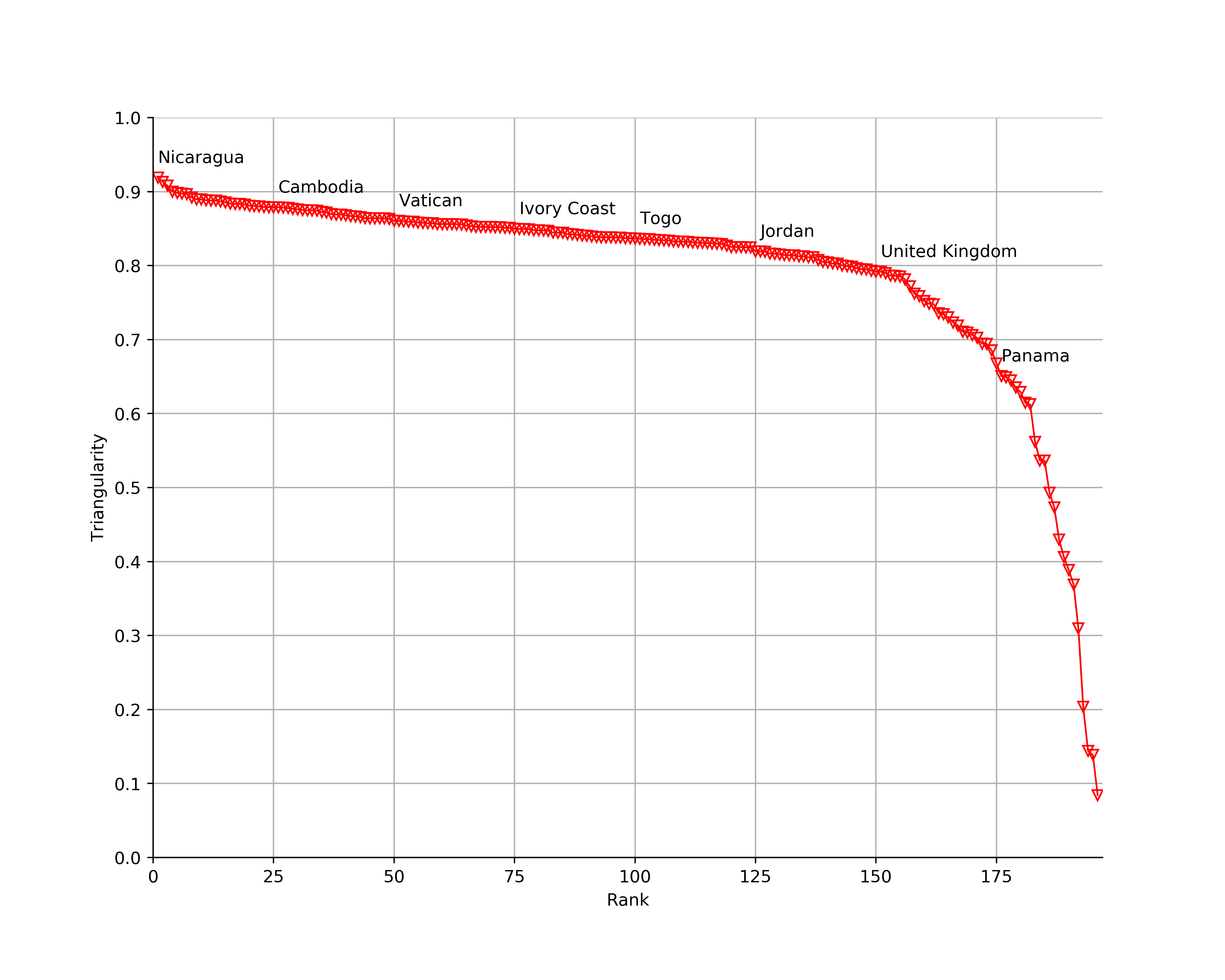 Looking at pictures of the best triangles, it does seem like the optimisation has worked as intended, at least to the human eye. I think I would have picked similar triangles if I were doing the process manually.

Below is the final list of triangular countries. If you want to view the images in more detail, you can either open the images in a new tab or download them.

Python code to calculate the triangularity of every country in Natural Earth’s ne_10m_admin_0_countries.shp shapefile.